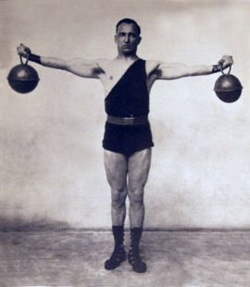 The kettlebell, or Girya in Russian, is an old Russian strength and conditioning tool. It has been used for centuries by the Russian military, police, and the laymen to gain strength, agility, power and endurance. It has been used both as a training and a testing tool in competitions. Although it first appeared in a Russian dictionary in the year 1704, nobody knows the exact origin of the kettlebell, although there are some theories.

One of the theories is that the kettlebell started life as a farmer's balance weight, used to measure out quantities of goods on balance scales. As it is the nature of people to compete and test their strength against others, the balance weights were then also used in competitions to see who could lift them the most. Another theory is that the kettlebell was invented by the artillery branch of the military, who added a handle to the cannonball in order to develop strength that they could apply to loading the cannonball in battle.

It is known, however, that regardless of the origins of the kettlebell it was indeed used by the artillery soldiers and all other branches of the military, the police and militia, the laymen, and professional athletes and wrestlers of the 18th, 19th, and early 20th centuries. Famous strongmen and wrestlers like Eugene Sandow (the man appearing on the Sandow statuette, presented to the winner of the Mr. Olympia), Louis Cyr (famous Canadian Strongman), Georg Hackenschmidt (the first widely recognized World Heavyweight Champion in wrestling and inventor of the Hack Squat), and many others lifted kettlebells.

More recently the kettlebell has been used by such people as Dr. Valentin Dikul, a Russian strongman and therapist known for juggling 90kg (198lb) kettlebells on stage. In the western world the kettlebell is now used by the US Marines, Special Forces, FBI, and the Secret Service. It is taking off with members of the RCMP. Now everybody from housewives, to professional athletes and mixed martial arts fighters, to firemen and police officers, to post-rehab patients are learning and benefiting from everything a kettlebell can help you achieve.
Powered by